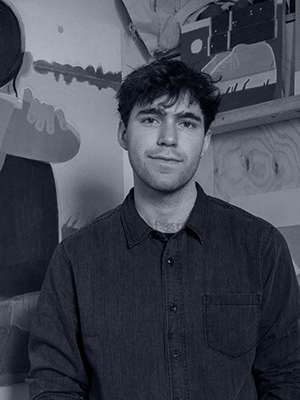 Jackson Joyce (b. 1994) is a Louisiana-born artist who seeks to paint a world where things look the way they feel. He received his BFA from The Rhode Island School of Design in 2018, and now lives and works in Brooklyn, New York. His paintings tell his own stories, nostalgic and personal, pulling inspiration from his life growing up in the south, often exaggerating proportions and color to convey off-kilter narratives. In addition to his studio practice, Jackson works as an editorial illustrator and his images accompany stories in publications such as The Washington Post, NBC, and The Paris Review.