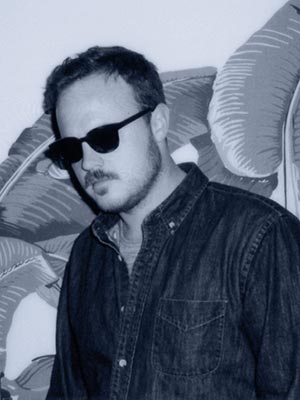 You shoot on film rather than in digital. What about that process has encouraged you to hold fast to film photography rather than transitioning to digital? Do you strictly use film?
I do strictly use film and print traditionally straight to paper. I pray that Kodak and Fuji outlive me since I am not the biggest fan of computers. I like being grounded in reality—a physical reality around me that I can interact with and touch, which I feel traditional photographic methods allow me, personally, to do better. Many of the important parts of my creative process would be eliminated if I worked digitally.
The Daymoon series took you quite a few years and many moons to complete. How did you first become interested in daytime moons, and where were the photos taken?
The daymoon photographs from Tide Study were shot over a period of four years during which I encountered the phenomena 15 times. From the first time I noticed the Moon during daylight, I was instantly both seduced and confused. It became a hunt to document this odd occurrence where it seemed almost as if something had gone awry with the rotations of the Moon around the Earth and the Earth around the Sun. The images were taken all over the world from the south of France to Los Angeles.

From the first time I noticed the Moon during daylight, I was instantly both seduced and confused. It became a hunt to document this odd occurrence where it seemed almost as if something had gone awry with the rotations of the Moon around the Earth and the Earth around the Sun. — Ryan James MacFarland

What was the inspiration behind the Tide Study series?
For as long as I can remember, I have had an overwhelming obsession with nature and it’s mechanics. Tide Study was a way of presenting how I look at the natural world. Rather than breaking down the complex systems of nature to their base elements, I wanted to show the relationship between the Moon and Earth’s water as an ethereal and mystical symbiosis.
What was the inspiration behind the Almost series?
With most work that I have presented to the public, none of the images are really taken with a specific inspiration or motivation. Themes emerge in the editing process after taking pictures for a year or two and reveal themselves through a reintroduction to what I had seen through my camera.

For my first solo show, almost, I think the work really became about my conscious existence and, ultimately, disappointment. The title comes from the notion that nothing is ever complete. The show mirrored the way I had felt in the preceding years, being in a sort of quarter life crisis at 21-22 years old, where I was never satisfied. The dialog within the pictures, whether landscape or portrait or still life, always came back to my struggle with self-awareness and my relationship to the world outside of my own mind.

Your work re-introduces landscapes through the use of geometry and repetition. What have you found through your exploration of the rationality in nature?
Because most elements of nature are assumed to be quite concrete and specific, I really enjoy trying to play with that. It becomes a game of manipulation on my part: I present the viewer with a familiar and recognizable subject, and then use certain strategies to making the viewer question the truth and validity of what they are seeing. I enjoy defamiliarizing subjects of the landscape through abstraction, scale, as well as geometry, repetition and mirroring.
You mentioned you captured some of your landscapes while traveling across the states and abroad. What has been your favorite place to travel to?
In both the summer of 2005 and 2006, I drove from New York to California over the period of several weeks. The landscape of America has been by far the territory I have explored more than any other and my most loved to this day. I could be happy aimlessly wandering here forever.
Tell us something people would be surprised to discover about you.
I’m supposed to wear glasses.

Devon Reina is an artist and designer interested in the way that simple marks of color can interact with each other to suggest the illusion of depth, movement, or direction.

Inside the Studio Visit with Damien Davis