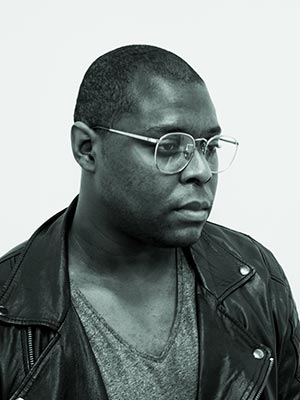 Where are you from and where do you reside?
I was born in Crowley, Louisiana, raised in Phoenix, Arizona, and currently reside in Brooklyn, New York.
Describe a typical day in the studio for you.
I have a punch list of things I need to get through on any particular day. Aside from that stuff, I try to keep things pretty loose. My time is typically split between generating work on the computer and using the various machines necessary to output the work. In this sense, I’m almost always in the studio.
How do you choose your materials?
I believe in maintaining an “honesty” to the materials I use. I prefer to pick materials that are undeniably what they are. For me, it is important that the materials be legible as exactly what they are at all times.

When did you begin your current practice?
The current body of work began a few years ago, back in 2014.
How do the different elements of imagery come together in your work?
At its core, the work I make is rooted in a lifelong, ongoing project to establish a growing visual language made out of a discrete iconography, capable of functioning long after my life ends. As a result of this, nothing ever gets discarded, but is rather constantly recycled, remixed, and reorganized into new work. I seek to unpack the visual language of cultures both domestic and abroad, questioning how these cultures code and decode representations of blackness. Ultimately, I am developing a personal language of discourse by amassing, curating, and strategically deploying individual icons into various assemblages and objects.
Can you walk through a few of the motifs that are part of your vocabulary? What do these images reference, and where are they from?
Several of the motifs were originally generated in order to investigate my relationship to the ornamental Blackamoors sculptures ubiquitous throughout Italy, drawing parallels to my own relationship with both the mammy figure and other darky iconography in the United States. This gets accomplished through the use of wine grapes, cowrie shells, and oversized lips (among other iconography) generated in response to these ornamental objects.

At its core, the work I make is rooted in a lifelong, ongoing project to establish a growing visual language made out of a discrete iconography, capable of functioning long after my life ends. — Damien Davis

You have a particularly unique process for creating your artwork. What led you to this process and how did you know it was the right one to pursue?
The last 14 years of my practice have been focused on an in-depth and evolving investigation of the formal and political signification of lines and vectors, both on an American and trans-global context. I am interested in how lines can be used (both aesthetically and conceptually) to divide and connect ideas, while also having the potential to encircle and diagram even broader ones.

Vectors exist digitally as a combination of various sets of data in computer software: Points along an x and y axes, direction of a path, angle of a curve, et cetera. The parameters of the vector objects I render using this software can be stored and later modified into infinite permutations, allowing me to move, scale, and rotate objects without degrading the quality of that original drawing. I employ vectors to facilitate my investigation into representations of (seemingly) concrete ideas that can only be realized in base iconic forms.

Why do you choose to work with vectors?
I am constantly looking for new ways to produce and present my projects, and have thus far completed bodies of work that employ digitally printed images, laser-cut plexiglass, digital embroidery, and woven tapestries made out of these vectors. My current work focuses on stretching the limits of what lines and vectors (along with emerging technologies in general) are capable of doing. Through new technology I am able to output my work in almost any way I choose, challenging the notion of drawing as merely a preparatory medium. Conceptually, I view all my work as drawing, because that original source (the vector) never gets left behind.

My current work focuses on stretching the limits of what lines and vectors (along with emerging technologies in general) are capable of doing. — Damien Davis

How important is spontaneity in your art?
Because my work primarily gets made on the computer, I have to make a special effort to build in opportunities for spontaneity to happen. This typically involves deliberately leaving certain decisions unmade before I output the work.
Have you ever collaborated on artworks, or would you?
My practice typically is very solitary, though I have collaborated on performance work with artists Jeffrey Burdian and Andria Morales. I’ve also created collaborative sculptures with artists Amy Ritter and Devra Freelander.
Do you remember the first work of art that captured your attention?
The first piece to have a real impact on me was the Felix Gonzalez-Torres piece, “Untitled” (Portrait of Ross in L.A.) that I saw at Scottsdale Center For Contemporary Art when I was in high school in Arizona. I think seeing that piece is what cemented things for me. I knew I wanted to make work as impactful as what Felix was doing.
Is there something people would be surprised to learn about you?
I’m a huge nerd. Though that probably isn’t surprising after knowing me for five minutes.

At Uprise Behind the scenes of "The Slowdown"

In their two-person show, "The Slowdown", artists Carla Weeks and Katrine Hildebrandt-Hussey explore the transcendent and intangible qualities of human experience.