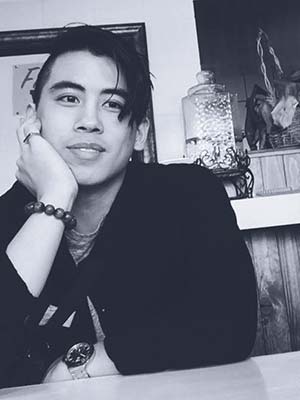 Adrian Kay Wong (b. 1991) presents encapsulated moments that display a focused lens on the intimate, familiar, and human connection. Wong explores the interactions between negative space and figure, segmenting his surfaces with shapes that are collectively representational, but independently function as abstract forms. By exacting an extreme flatness that forces ground and figure on more equal planes, Wong also levels the attention between primary subject and contextual elements. The paintings are distinctively personal through the portrayal of narratives that are often sourced from his own adolescence. By investigating these sentimentalities with a deliberate and measured simplicity, Wong attempts to glorify the ordinary and reimagine the everyday. Wong was raised in the east San Francisco Bay area and now lives and works in Los Angeles, CA. after receiving his BFA from the School of the Art Institute of Chicago in 2013.