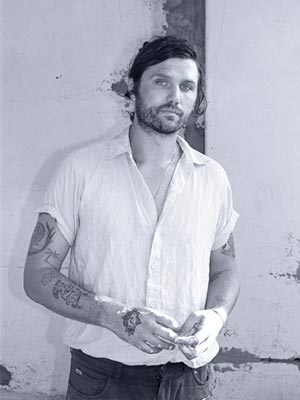 Where are you from and where do you reside?
I was born in Houston, Texas, but since childhood I’ve lived in Ohio, Detroit, Indonesia, London, and New York City. I currently live in Los Angeles.
You shoot landscape in a portrait format - what about the vertical format appeals to you?
I see my landscape pictures as portraits, reflections of my inner-life, or a sort of personal geography of this country inside myself. Photographing nature in this way started in Death Valley. I went to the desert with a simple plan to shoot portraits of landscapes. I suppose I wanted to build my own little bridge between these two colossal photographic genres, but I definitely was more interested in seeing a landscape as a portrait rather than the other way around. I knew I wanted to create photographs that would create sensory experiences, and I wanted to depict this desert, that’s been photographed so much, in a different way, in an emotional and personal way. Shooting these vertical portraits provided at least a basic foundation to build something from.

I knew I wanted to create photographs that would create sensory experiences, and I wanted to depict this desert, that’s been photographed so much, in a different way, in an emotional and personal way. — Jordan Sullivan

Have you always worked with photography?
In one way or another I feel like I have, even though it wasn’t my primary focus until a few years ago. Growing up I was obsessed with the family photo albums my parents kept. I loved the way some random snapshot could unwittingly reveal so much soul.
How do your surroundings direct your approach to your work?
When I am in a new place it takes me a while before I can photograph it. I first need to wander around and take in the experience of looking at the place. In Death Valley I noticed this flatness when looking at the mountains pressed up against the blank skies. It was as if the two were sewn together. The distance between things seemed elusive, and I wanted the pictures to somehow convey this flatness, this strange sense of space. The flatness and uncertain distance, to me, suggests a space coming into being, this other space, a point of origin.

On an emotional level I often see my own internal struggle reflected in nature, and this was definitely the case in Death Valley. I saw colors that weren’t there, or rather, I felt colors, and they suggested something invisible. I felt like I was hallucinating, or wandering between reality and a dream, and I was hoping to capture that feeling or that space.

I had this overwhelming sensation when I first set foot in Badwater Basin - the lowest point in North America. I had just moved from New York City to California. I was feeling sort of lost and dazed, and I suppose I was at a low point in my own life, as well. Alone, in the basin, I watched the light, bright and singing, blinding me, enveloping everything, but the hills felt alone, solemn, melancholic, and distant. The place, like me, seemed at odds with itself.

I had this sense like some piece of my soul was buried out there, and I didn’t want to leave until I found it. The struggle, the searching, that’s what keeps me alive. The feeling I got in Death Valley, on that first trip, made me want to return over and over, to keep photographing the hills and the light, to create my own reality within that space. Since then, every time I return to Death Valley, I am at once in awe but also strangely terrified, because in the desert I am nothing. The landscape is unforgiving. It doesn’t care if I am there or not, alive or dead. I find some of the strongest work not only comes from places that are deeply personal, but also from places of discomfort and from times when I am forced to experiment, improvise, or confront my own nature.

How do you incorporate chance in your creative process?
I don’t know how much I believe in chance. More and more I have come to believe that all of this is fated. However, I don’t conceptualize my projects too much. I follow my gut and just keep working. I tend to treat the work like an organism. I watch it, listen to it, follow it. I create a dialogue with it. I let it become what it wants.
At what point did you decide to point your camera up above the landscape and record the colors of the sky?
I am drawn to in-between moments - moments that are undefined, colors we don’t have names for. The sky images exist in that in-between space. I try to capture that moment when time begins to shift, when the sky is about to change. I look for the space between two colors, or that instant just before a color is about to vanish.

What themes or motifs are you consistently drawn to?
Color, time, silence, and memory.
How do the different elements of color inform the final piece?
Color is everything. It’s everywhere. Color speaks so many languages. Nature, silence, emotions, and sound all hold color. The spirits within things hold color. In my work color offers a sense of wonder, makes reality feel imagined, and has the potential to make ordinary moments ecstatic.
How has your work developed in the past few years, and how do you see it evolving in the future?
I’ve begun to notice these questions of color and time within my work. Is color time? Is time color? What is the color of memory? What is the color of time? How connected are the two? I don’t know where all these questions came from. They all form rather abstract arguments, but somehow color and time seem to be the foundation for so many of my pictures.

As for the future, that always feels like a far-off light that I am reaching for. I try to remember where I am from and who I am when making something new and moving forward. It’s that old struggle to be true to oneself. I want to learn so much more about the world and my place within it, so the fate of my future projects depends on how close I can get to the world, how much of it I can see and feel and come to terms with.

In your Death Valley work it seems color is a proxy for the passage of time - do you agree, or is the relationship more complicated?
I agree to an extent because color and light punctuate the time we have constructed, so naturally seeing certain colors in nature or in the sky will recall specific times of the day or changing weather patterns. However, the Death Valley images also exist in their own time. This wasn’t intentional when I was shooting. It’s something that occurred to me later as I was editing the work. When I first set foot in Death Valley I immediately could feel time, but it wasn’t the kind of time that’s measured in days, years, or by the weather and the changing seasons. Everything felt at once eternal, still, and ancient, and I felt incredibly present, which is always a challenge for me. It almost felt like being in limbo or a sort of purgatory. I felt completely insignificant but peaceful within this time. The desert itself already felt like a photograph, like an object with its own life, in its own time. So many places in nature have this feeling, some people have it too, and I suppose that’s one reason artists keep returning to portraits and landscapes.

The desert itself already felt like a photograph, like an object with its own life, in its own time. — Jordan Sullivan

Describe a typical day in the studio for you.
I spend the beginning of my day doing the normal stuff - answering emails, scrolling through my phone, checking in with friends, then reading, and writing. Writing is sort of like drawing for me. It helps give form to whatever I’m feeling or grasping for, and I am constantly jotting down notes, poems, half-thoughts, and titles for pieces and exhibitions. I usually work on multiple projects at once so there’s a lot of time spent editing pictures, shooting pictures, destroying pictures. I publish a number of artist books too (for myself and others), so sometimes a portion of my day is devoted to that. I usually take a walk at some point, and I spend at least a little bit of time being “shiftless” as Raymond Carver called it. Lately, I’ve been traveling a lot, and planning new projects, so I have not physically been in studio too much.
Big Raymond Carver fan? Do you have a favorite Raymond Carver story?
Some of Carver’s interviews - his thoughts on life and literature - are almost more fascinating to me than his short stories. However, his poem ‘Shiftless’ is a great one.
What’s one of your favorite objects you own? What’s the story?
I got the same fortune from two different fortune cookies at two different Chinese restaurants in two different cities over the course of two years. The fortune reads “We all live under the same sky but we don’t see the same light.” I laminated both fortunes together and I keep them with me wherever I go.
It makes sense that those fortunes would resonate with you! So much of your work is about subjectivity and internal connection to the natural world rather than proposing the world as it may appear objectively. How do your works, as photographs, operate as documents in this framework?
​I wanted the pictures to at once depict Death Valley, but I also wanted to transform the desert into an interior landscape, an articulation of human emotion. Some of the most universal work starts from very specific places. In the case of the Death Valley pictures, I created my version of Death Valley.

I think it is readily apparent that this work is personal vision of Death Valley, even if viewers do not know the exact location of the place depicted. So, while these images reflect my own emotional life, I hope they can connect with viewers memories, too. Additionally, I made specific color choices to enhance the mood of each image, to create a sort hallucinatory space. The dream of a place often says more about that place than what can be seen in plain sight. This hallucinatory space also puts the Death Valley pictures in a place between abstraction and representation, and perhaps this opens the work up to being interpreted in different ways or gives the pictures a certain universality, turning each image into portal for viewers to have unique personal experiences. Of course, I don’t expect everyone to have the same feeling toward the work, but, as in life, it’s just important to feel something.