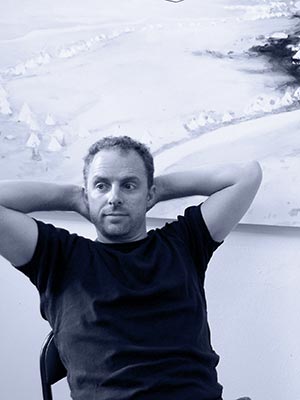 Where are you from and where do you currently reside?
I grew up in southeastern Washington state, in the desert, and I currently live in Brooklyn, NY. My studio is right next to the Manhattan Bridge.
What was it like growing up in an industry town? How have those experiences influenced your work?
I grew up in Richland, WA, which is next to the Hanford Nuclear Reservation. Hanford is famous, among some circles, for its involvement in the Manhattan Project — engineers there made the plutonium for the Nagasaki bomb, then went on to produce the majority of plutonium used for the US nuclear arsenal during the Cold War. By the time my family arrived this was all winding down and Hanford is now a center for environmental science and remediation. But to say it was an industry town is a bit of a euphemism — originally, Richland’s raison d’etre was to build weapons.

At the same time the landscape around there is very special. Not many people know that eastern Washington state is actually a vast desert steppe. Its very flat, very dry, very hot in the summer, and very beautiful, in a subtle way. The landscape is so wide open it’s almost otherworldly. It doesn’t have major features like mountains, so it’s very minimal and unrelenting. The colors are diffuse ochres and greys, against crystal-blue skies.

I’m sure my aesthetic was formed by this landscape – you can see that in the colors I tend towards: pinks, beiges, greys. As for the subject matter, I think beauty often has something to do with the juxtaposition of the visually attractive and the deadly. And the desert is nothing if not potentially deadly.

You’ve mentioned your work often references the Cold War and its aftermath; are there specific books or sources that you are drawn to for visual, factual, or cultural reference?
I’ve been very inspired by books on science, color, and the history of technology. Richard Rhodes’ book “The Making of the Atomic Bomb” was particularly an inspiration — that’s what made me think it was possible to make paintings about such a huge topic as the aftermath of the Cold War. I also use visual references drawn from the 80s like vector video games and Joy Division album covers. The popular aesthetics of that time reflected a very harsh view of reality, including an ever-present threat of global annihilation.

I think beauty often has something to do with the juxtaposition of the visually attractive and the deadly. And the desert is nothing if not potentially deadly. — Eric LoPresti

Your work investigates the interplay of the image picture plane with additions of color and line. How do these elements come together during your artistic process and how you view their different functions within a work?
Good question. First, I should say that it’s always changing. Five years ago I wasn’t using the black lines at all — my compositions simply juxtaposed landscape imagery with color fields. After a while it turned out that I didn’t have enough elements. I needed something to inject a feeling of anxiety or anger into the image, and to work against the subtle undulations of color. So the black lines are currently very much in contrast and contradiction with the other two elements (landscape imagery and color).
Do you look to any other art mediums for inspiration?
Music is a constant focus. I played music when I was a kid and the bug just never left. I can’t tell you exactly how this relates to my painting, but I can say that I learned about Gerhard Richter and John Zorn at exactly the same time.
What is something people would be surprised to learn about you?
That I’m partially color blind.

Originally from France, Ba Ousmane is a Tokyo-based artist who creates figurative and domestic compositions in the tradition of Japanese ink painting.

At Home A warm sanctuary in Toronto

A Toronto-based art advisor creates a warm, bohemian sanctuary by collecting from the heart.