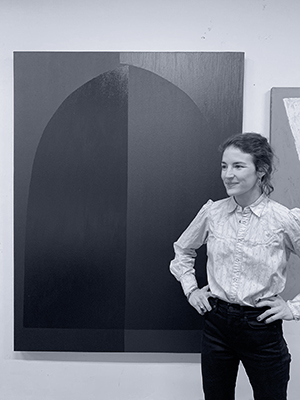 Where are you from and where do you reside?
I am from San Antonio, TX, and I reside in Brooklyn, NY.
Did you go to art school?
Much of my training happened at art schools. I attended the New York Studio School, Maryland Institute College of Art, Chautauqua School of Art and Skowhegan School of Art and Painting. Ying Li has been a great mentor to me, as has Sangram Majumdar.
What tangible objects or intangible moments are you most interested in representing through your works?
I am interested in a feeling of physicality, coupled with a sense of elision, slipping, screening, and veiling. I am interested in something that is, or indicates, two things at once. For instance, a veil is always both present as itself, articulating some kind of plane, while equally indicating that something is behind it.
What themes or motifs are you consistently drawn to?
Arches, patterning, mirroring, symmetry/asymmetry, doubling, the idea of game boards or playing fields, something that is two things at once (like the Necker cube or the duck-rabbit).
Tell us more about how arches feature in your work. When did you begin investigating this element?
I like the arch because it is a mash-up of the circle and the rectangle. It is not a closed curve like a circle, yet it has the increased visual speed of a partial curve. At the same time, it has a rectilinear element as well, without again being a closed rectilinear form.

This quality of the shape not only makes it an interesting hybrid shape in my view, but it also means that the shape lends itself to figure-ground reversal, which is something that also interests me.

Drawing on these formal elements, I am interested in the way the shape can flip from reading as a passage to a wall.

"Drawing on these formal elements, I am interested in the way the shape can flip from reading as a passage to a wall." — Aschely Vaughan Cone

You recently travelled to Jakarta on a travel grant - how did this trip influence your work in the studio?
While in Java I spent time looking at the monumental, sacred architecture of the Borobodur and Prambanan temple complexes. I also studied Indonesian Ikat, Lurik, and Batik textile traditions, particularly those found in Java and Bali. In both investigations, I was interested to learn how pattern worked. I think I am still digesting the trip, but it definitely gave me a new and more complex understanding of architectural and textile forms.
Do you find that your location strongly influences the direction of your work?
I thrive off of working in an energized community of artists and I love working in energized places, like cities. At the same time, I also enjoy working in more meditative, rural places. Windows are really important to me; I love natural light and being able to see what’s going on outside. I also love being a few floors up and having a good view.
What necessities do you require when making your art?
Because much of the work that I make is fairly large, I need a big space to work in. Probably one of the most essential things in my studio is my large glass palette (6’ x 2’). Smaller handheld palettes are also great to have, and so are reusable mixing cups that seal to preserve unused paint. Lastly, plenty of light is needed to work - with natural light and great windows being the most ideal.
Describe a typical day in the studio for you.
I love long studio days, and so often I’ll try to arrange my schedule to have long blocks of 8-16 hours in the studio. On some days, my work is dedicated to preparing supports, in which case there will be a lot of sawing and woodworking. On others, I’ll be looking to paint, often focusing on one to two large works. Prior to getting to work, I spend time thinking about various options for the piece and brainstorm my next moves. I might look at my drawings, or warm up by drawing or making small paintings. When I am ready to really start working, I enter into a period of intense focus. I may work on one big painting, or a few simultaneously. Once I have come to a stopping point, I will often make a number of small paintings with the excess paint that remains; since I am fully warmed up, I find I learn a lot from making these and looking at them later. Usually, at this point there is a huge mess to clean up!

Have you ever collaborated, or would you?
Definitely. While I have never formally collaborated, working in proximity to other artists always seems to lead to a kind of informal collaboration.
Is there any artwork on display in your home or studio?
Yes! The work belongs to: Tommy Dahlberg, Jackie Feng, Ryan Severance, and Simone Kearney.
Do you maintain a sketchbook?
I do have multiple sketchbooks going at any given time. Sketching in various forms is a big part of my process.
Do you see your works as unique or as part of a series?
I see them more as being part of a family, and this is one reason I enjoy showing them as a group.
What is the most difficult part of the artistic process for you?
There are so many difficult things about it! The cost of materials and space is one difficulty. Another, though, is finding a balance in the kind of dialectical process of questioning versus enacting ideas - or pushing toward growth and not being satisfied, but also completing things as well.
Are there any aspects of your process that are left to chance
Not too much of my process is left to chance in a broad sense. However, chance does enter into the work via mark-making, the physicality of the paint and the way the work’s history might show up in the final image. In addition, a “mistake” might get integrated into the image. In this case, the “mistake” would be an act of chance that, thereafter, might be said to determine certain aspects of the painting.
Is there a painting that you can think of where a “mistake” determined the work?
I can’t really think of one at the moment. This is partly because working in a way that is driven by asking questions and seeing what comes engages with a kind of chance or uncertainty and opens the door to things that might not immediately work. However, as the work progresses these moments are integrated into the work or painted over, and so they just become part of the work after a certain point.

"A 'mistake' might get integrated into the image. In this case, the 'mistake' would be an act of chance that, thereafter, might be said to determine certain aspects of the painting." — Aschely Vaughan Cone

Do you remember the first work of art that captured your attention?
I wrote my undergraduate thesis on a number of Cézanne’s works in the National Gallery of Art, Washington, DC. These were the first works that I really internalized. I found them so unusual that I kept coming back to them, and, since, his work has been a touchstone for me.
Are you influenced by any artist that does something completely different than you?
Aristotle, Plato, Nietzsche and Merleau-Ponty have influenced my thinking a great deal. I find the work of Michael Heizer, Robert Smithson, Doris Salcedo, Felix Gonzalez-Torres, Eva Hesse, and Roni Horn very powerful. I also have been particularly inspired by The Chinati Foundation in its entirety, particularly the installations of Donald Judd, Dan Flavin, and Roni Horn.
Of the shows you have recently seen, which was your favorite, or which was the most inspiring?
Roni Horn’s show at The Glenstone Foundation.
Where do you find your day-to-day inspiration?
I try be ready to take inspiration from anything that I might run across that is exciting to me visually, or otherwise.
How important is spontaneity in your art?
Spontaneity is very important to me because of what it requires of me while working. Although I will often have a sense of what I am going to do when working, I like to approach each move open to the possibility that it might change the entire painting.
How do you see your work developing in the future?
My work has shifted from smaller-scale perceptual paintings, always executed on-site, to large-scale abstract paintings. In the future I think it could become more intimate, possibly more sculptural and more minimal, or, conversely, even more whacky and large-scale.

"I am interested in something that is or indicates, two things at once." — Aschely Vaughan Cone

What’s one of your favorite objects you own?
I love owning a miter saw and table saw. Having these makes me feel like I could build anything!
Is there something people would be surprised to learn about you?
When I was growing up, I had a pet sheep named Buster and a pet longhorn named Stella.

Devon Reina is an artist and designer interested in the way that simple marks of color can interact with each other to suggest the illusion of depth, movement, or direction.

Inside the Studio Visit with Paulina Ho

Paulina Ho shows us inside the Winter Corn Place, the site of her self-directed artist residency in Taos, New Mexico.