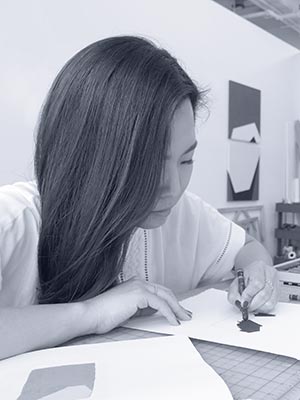 Hyun Jung Ahn (b.1986) is a Brooklyn-based multidisciplinary artist, from Seoul, South Korea. Through her work, she investigates enigmatic abstract forms which she references as “shapes of mind”. She begins by drawing from her visual diary which captures feelings, personal connections and emotional states of being. She then translates these notions into minimalistic drawing, painting and sculpture. Ahn was selected as the 'Emerging Young Artist' at La Mer Gallery, Seoul South Korea and was the Winner of Emerging Art Award at Baditto Art, Tuscany, Italy. She has attended residencies including, Vermont Studio Center, Johnson, VT, MASS MoCA, North Adams, MA and Trestle Art Space, Brooklyn, NY. Ahn Graduated from Duk-Sung Women’s University, Seoul (in 2010 B.F.A and 2013 M.F.A) and received her second M.F.A in painting and drawing from Pratt Institute and currently lives and works in Brooklyn.