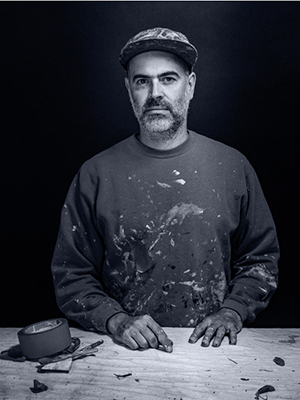 Where are you from and where do you reside?
I grew up in the suburbs of Paris. I lived there and commuted to Paris on the train until I went to art school in Madrid for Erasmus. I currently live in southwest France in a beautiful region called the Perigord Noir.
What necessities do you require when making your art (radio, specific paintbrushes)?
I need constraints to trigger the creative process; I need to know what I can’t do, what I can’t use. Surrounded by these boundaries I find myself at ease to further develop an idea. The constraints can come from the architecture of a building I have to paint, the specificity of a space where I have to build an installation, some material I have to use or the nature of a city for a walking performance.
Describe a typical day in the studio for you.
A typical studio day doesn’t really exist for me. Every project is different and I adapt the space and time I have to it. Actually, the tables in my studio are all on wheels so I can change the space to the needs of the moment. When preparing for a show, I usually work on site and rarely prepare artworks beforehand. I prefer to spend time in the town or city, as an artist in residence, and develop everything on site. I am used to recreating my workspace everywhere I go.

Chance is a large part of your creative process, can you describe why?
Since the very beginning of my career, I have been making artworks to be seen outside, in the city, in the street. When you abandon an artwork in the streets, you no longer control it. Anything can happen. That loss of control is what pushed me to investigate how external factors can interact with my creations. This led me to work with the movements in the city, randomness and generative protocols. Instead of fully controlling the creative process, I really enjoy being an observer of my creations and accepting unpredictable outcomes.
You describe your work as generative, can you elaborate?
Creating artwork following a generative protocol is wonderfully exciting because the result is unknown. I use the word generative because the end result is determined by the rules that I set, the script that I write. Over the years, while searching for ways to connect my work in the public space with my studio practice, I became obsessed with randomness and constraint - with the unknown and the loss of control. This allowed me to develop a unique, innovative process that provides an antidote to control.

Using a set of simple, playful rules and the creation of a protocol powered by aleatory, I can create generative pieces both in the studio and in the public space. These “scripts” allow me to play with uncertainty while maintaining an aesthetically coherent result.

Using a set of simple, playful rules and the creation of a protocol powered by aleatory choice, I can create generative pieces both in the studio and in the public space. These 'scripts' allow me to play with uncertainty while maintaining an aesthetically coherent result. — Eltono

In our virtual studio visit you had briefly shown us your drawing machine. Can you tell us more about how this factors into your practice?
A CNC machine is meant to cut wood following complex shapes. I used it to build a pen adapter and I converted my CNC into a plotter. The first step is to generate the drawing, I do that with Processing, a coding software orientated to visual artists. I select the shapes and the grid then the script generates the composition. The result is translated into a toolpath and sent to a second computer which controls the CNC. I really enjoy the process of these drawings and, like in the majority of the things I do, I don’t know the final outcome until the tracing is fully finished.
Can you explain the importance of creating public artwork?
I really like the way people confront public art, very often they run into it without expecting it and this establishes a strong relationship between the viewer and the artwork. Working in the public space is not an easy task, I do not consider a building the same as a canvas, the street is not a cosy studio and whenever I have to work on a support that is outside, I always take the surroundings and the users into consideration to prepare the artwork.

You have a particularly unique process for creating your artwork. What led you to this process and how did you know it was the right one to pursue?
I became interested in generative art after observing the evolution of the unsanctioned art I installed in the street. I realized I was losing the control of the artwork and that its fate was depending on factors I couldn’t predict. Instead of fighting against this decay, I started to document and analyze it. For my gallery work, I found ways to emphasize this loss of control by adding uncertainty in the creative process. This logically led me to experiment with randomness and got me into generative art.

When working on a generative mural in the public space, I first write a specific protocol based on the geometry and already existing architecture of the building. Then I bring my “script” outside and divide the wall into a grid. Through random, aleatory play, I determine which shapes I will use, the rotation of each shape, and the color. I play this game for each box in the grid, painting and following the rules I set in my script until the mural is complete.

When working in my studio, my generative pieces are created with the aid of a few different tools. Like my generative murals, I start by writing a protocol, a list of rules. I apply this generative workflow to sculptures, drawings, paintings, assemblages and prints. I found the process of silk screen printing very interesting to play with. I like to define a few shapes and then play with the colors and the screens to obtain more combinations.

What’s next for you?
I’m currently working on a big solo show in an Art Center in France for the month of July where I will present a selection of works ranging from experiments in the city to generative wall paintings to participative installations. The common feature between the works will be the uncertainty of the final results, placing the visitors and the artist on the same horizontal level, both actors and observers of the creation of the artworks.