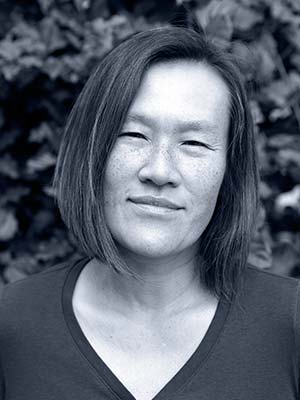 ReCheng Tsang (b. 1967) works primarily with porcelain, creating site-specific installations and smaller sculptures. Previously, she was the co-director of the Oakland Art Gallery and was a lecturer in the Ceramics department at the California College of the Arts from 2006 - 2011. After two years as an apprentice at two ceramic studios in Tokyo and Kanazawa, Japan she formed the technical foundation of her art practice. Her current work consists of up to several hundred and sometimes thousands of thin porcelain pieces. Each piece is rolled, pinched, pulled, torn, or otherwise manipulated by hand, then composed within a pre-defined grid to explore the intrinsic qualities of porcelain and create work that is tactile and sensual.

Tsang's work was recently included in the New West Coast Design 2 exhibition at the San Francisco Museum of Craft and Design and at 2-person exhibition at Kaller Fine Arts Gallery; she has exhibited previously at the Sonoma Museum of Contemporary Art in Santa Rosa and the Dorothy Weiss Gallery in San Francisco. Her work has been featured on The Jealous Curator, 7x7 Magazineâ€™s "Best of Bay Area Design", and California Home and Designâ€™s "Made in California" feature. Tsang's works are a part of private collections in California and nationally. She has previously been awarded a residency fellowship at the MacDowell Colony and the European Ceramics Work Center in the Netherlands. She received her B.A. from the University of California at Berkeley and M.A. with post-baccalaureate from the University of Washington at Seattle. Tsang lives and works in Berkeley, CA.